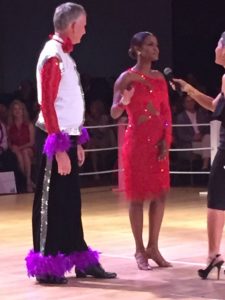 When Doug first took the stage, the crowd giggled with intrigue. It was either that or his large red bow tie, or his purple feather wrist and ankle accessories. His attire expressed a boldness and a braveness that is rare at such a formal affair. One thing is for sure, from the moment I saw him, I couldn’t keep my eyes off of him.

Doug began his routine with confidence and conviction. I knew I could never unsee what I was seeing, so I looked on with bewilderment. Could this be real? Is this actually our straight-laced, conservative COO movin’ and groovin’ with a tight white vest and a feather in his hat? 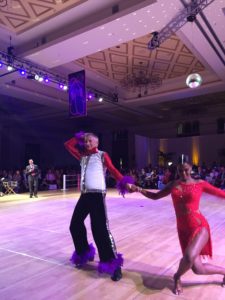 I followed his movement across the dance floor. Forward, backward, side to side, they shuffled. At one point he chased his dance partner, clawing at her shiny red dress. He took charge, swinging her to the floor several times like a player of players. He whisked her around like a romantic lady killer who was on the prowl. I knew the end was near when he tossed his “pimp daddy” hat out into the audience as if it was nothin’. Surely he couldn’t go on long without that magic feather… but go on, he did!

The way he wiggled showed the crowd that the fun was just beginning. His smile was now ear to ear and it was contagious. Confidently, he picked out the most gorgeous woman in the audience and went in for a kiss. It was his wife, but even still, his confidence in that costume would impress any skeptic. 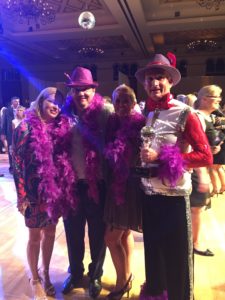 Finally, he bowed and the audience cheered. Doug shocked us all with his mad dance skillz and his outrageous zest for life.

We love you Dougie! Congratulations on a job well done. You made the Flagship Team proud!

Learn more about this fun charity event and Doug’s involvement at: https://flagshipsg.com/bocas-ballroom-battle-begins-tomorrow/

Read our blog and explore our website to learn more about technology solutions from Flagship.